Would you like to know more about Lady Macbeth’s character? If so, you have reached the right post.

Lady Macbeth is very compared with Clytemnestra of Aeschylus’ Agamemnon. At the beginning of the play, she appears to be cruel and relentless like Clytemnestra.

She welcomes Duncan to her castle with an idea of murder in her heart and with a smile on her lips. She looks like an innocent flower but there is a serpent under it. She plans the murder of Duncan with her iron mind. Her determination is grim and firm.

But Macbeth, with the brain of a poet and the heart of a villain, hesitates in his action. It is lady Macbeth who dominates Macbeth with her iron will and passionate courage. She looks fiend like at the beginning of the drama but collapses like a human being in the end.

Lady Macbeth plays the role of an instigator in this drama. Undoubtedly, Macbeth depends entirely on Lady Macbeth who is regarded by him as his dearest partner of greatness for the act of murdering Duncan to achieve his end.

Lady Macbeth instigates Macbeth by taunts and reproaches. Macbeth informs Lady Macbeth of the prophecies of the witches. She decides on the murder of Duncan to gain the thrown for Macbeth.

It is correct to remark that but for her, the murder of Duncan would not have been translated into a reality. A close analysis of the text reveals that in a sense. Lady Macbeth is neither Macbeth’s guide nor integrator.

At the beginning of the play, Lady Macbeth appears to be the very emblem of ambition also. Macbeth’s ‘ vaulting ambition ‘ is for his kingship, but Lady Macbeth is ambitious for her husband. When she thinks of the murder of the king very seriously she knows that Macbeth’s mind is ‘ too full of the milk of human kindness ‘.

So, Lady Macbeth thinks that it will be different for Macbeth ‘ to catch the nearest way ‘ to achieve the end. To encourage him to murder Duncan, she chastises Macbeth with the valour of her tongue.

She also advises him to look like an innocent flower and be the serpent under it. She takes the initiative in this great business. she shows no weakness, no hesitation and no conflict in her mind. At this moment she is bolder, stronger and more resolute than Macbeth.

Macbeth kills the sleeping king. But he brings the dagger with him to Lady Macbeth after the murder. He can not put the dagger back there. He is afraid to think about what he has done.

Lady Macbeth boldly asks Macbeth to give her the dagger and she reproaches Macbeth.

Even in the ‘ Banquet Scene ‘ Lady Macbeth shows her courage and resolute mind to save Macbeth from his terrible fall.

But in the first scene of Act-V, we get another picture of Lady Macbeth who suffers from the sleepwalking disease. Her moral and psychological degeneration begins.

She whispers, ‘ the thane of five had a wife: where is she now? ‘

Secondly, still, she smells the odour of blood in her hand: – ‘ here’s the smell of the blood still – all the perfumes of Arabia will not sweeten this little hand ‘.

She says at the end of the scene, ” what’s done can not be undone. To bed, to bed, to bed “. Thus, she thinks of the total night of the murder.

Thoughts come to her in a disorderly way. Indeed, the sleepwalking Lady Macbeth shows the collapse of Lady Macbeth and represents the picture of a broken woman. Her conduct in this scene is a sharp contrast to her earlier fearless mind, strong determination and heroic greeds.

The psychologists opine that the suppression and the repression of instinct, emotions and impulses lead to abnormal thoughts and behaviour.

She asks the spirits to thicken her blood to stop remorsing. The mother image comes automatically to her. The daughter in her is revealed when she says that Duncan resembled her father. Lady Macbeth suffers from anxiety and agony because she has acted against her nature.

Her somnambulism is the inevitable climax of a process of natural retribution.

To sum up, Lady Macbeth is not essentially either a Clytemnestra or a witch. She is an ideal wife in her own ways. As an ideal wife, she is compelled to do everything against her nature only for the sake of her husband.

It is needless to say that she suffers a double punishment – both outword and inword. Indeed, she is a tragic character.

Coleridge says, ” Lady Macbeth, like all in Shakespeare , is a class individualised “.

I hope this post will be very useful to you. 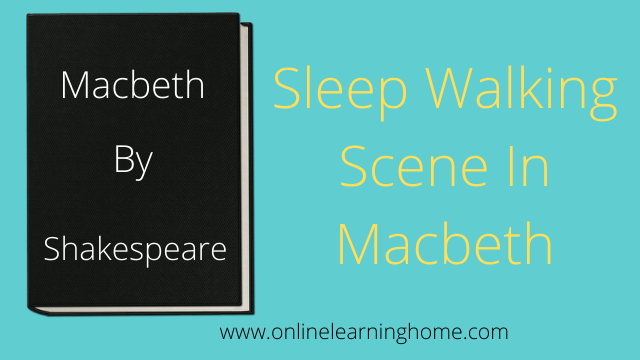